Have you ever seen a stranger pretending to be a bear? That will be the first thing you will see if you go to Kuterevo. The man we are talking about is Ivan, the founder of Velebit Association Kuterevo, which celebrates its 40th anniversary this year.

Nowadays the association´s aim is mainly to protect orphan bears of Croatia, offering them a shelter, and learning about natural and cultural heritage through different perspectives. Each year more than 200 volunteers travel the world to Kuterevo to support the project. We were part of them for ten days living in the middle of the forest 2,5km from the village in a place entirely designed and built by volunteers called Kopija.

Since we were living in the forest, the lifestyle required ability to start a fire for cooking, hearing wild pigs during the night and even having to deal with scorpions in your sleeping bag.

As the food was vegetarian we were supplied with local products such as cheese, cherry jam, ajvar and rakija. Even if you don’t drink, like some of us in the camp, rakija is traditional drink  that you have to try.

Our mission consisted of different tasks such as building ponds for wild animals, clearing up paths, decorating the place and, occasionally, going to the village to help other volunteers with their jobs.

Indeed, all the decisions were made collectively, this way we did not experience any conflict between us.    On top of that the timetable was flexible and could be adjusted according to our wish as well as the weather. 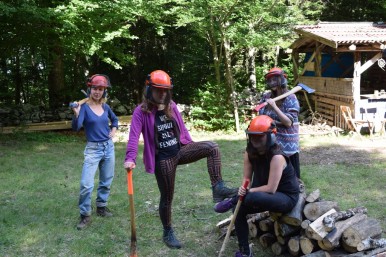 We also took part in the local community by visiting people from the village working with them, learning about their skills and experiences. For instance, we visited Dragica who makes coklje, traditional shoes made of recycled materials, hand-knitted and unique.

Đurđica, in the other hand, who has been a volunteer for many years, came to discuss the concept of peace on different levels as well as teaching us about SCI origins.

We enjoyed the simple style of living which strengthened our group relationship and the peace during our stay (we even found a common language with foresters working around our camp).

But these were not the only opportunities we had to meet with locals because lots of them were also part of the volunteers. We also cooked and had lunch with them.

However, the workcamp was not only about hard work but also about creativity and cultural exchange. Indeed, Kuterevo Volunteers Station and Kopija are covered with different pieces of art from all the previous volunteers and workcamps. For example, our group did a bear shape totem and painted the water collector in which we kept out food to prevent the wild animals from coming to the camp. Nevertheless, we occasionally had some guests such as a squirrel, dormice, bats, a wild pig, all types of insects and even something which sounded like a bear.

These experiences gave us a chance to share our cultural differences and discuss about it. As you probably know Croatia is well-known for its coast so that is where we spent our day off. Although our original idea was to hike in the Northern Velebit National Park  we spent only few hours there and we went to the beach because the weather was dangerous for hiking (very strong wind and no visibility because of the clouds + temperature of 5 degrees Celsius).

Our last day, we took part into a ceremony during which Ivan made us promise that we would behave according to Kuterevo spirit in our own countries devoting at least four days per year to volunteering, but also to gather more people in our everyday life and inspire them to become more active members of society.

Kuterevo spirit aims to create a global community in which people just help each other without any personal gain in order to build a peaceful world. Now it is our responsibility to spread it. 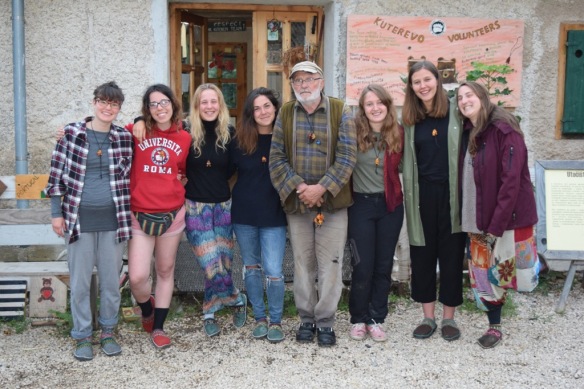