Autumn is here, and with it the traditional celebration of the event “Jesen u Lici” (Autumn in Lika) held in Gospić from the 2nd – 4th October.

This year the people from Kuterevo attended to strengthen the program with their abilities and skills for which they have been widely known for years.

Our old grandmothers Teta Dragica & Teta Kaja knitted traditional shoes (kuterevske coklje), and stric Milan made his traditional wooden chairs. There were also several other people from Kuterevo who made woodworks such as the music instrument “tamburica” (kuterevska dangubica – which is together with coklje on UNESCO’S list of intangible cultural heritage of humanity), “naćve” which was once used to make bread, “bukare” a vessel in which wine was stored, small sculptures of bears… 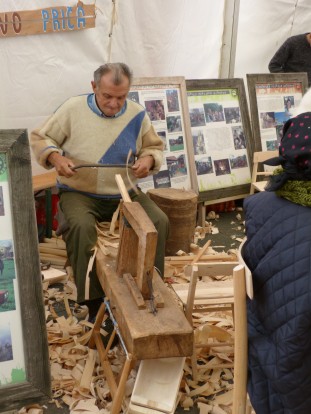 With them Matija Kobola and his wife from Slovenia had their beautiful  sculptures of bears. For this occasion they also made wooden necklaces carved in the shape of the sun for happiness and luck as a gift for the children.

On the stage we had KUD “Dangubice”, a young folklore cultural group from Kuterevo who are growing stronger every year.

We also had a group of volunteers who took along pictures and articles about the Erasmus+ program and the EVS (European Voluntary Service). Our volunteers were: Zuzana (Slovakia) & Mathilde (France) who are here from EVS for six months, Yazou (Belgium) this is her third time in Kuterevo, Louis (France) and Amelie. The goal for the volunteers was to talk to the visitors and inform them about the activities of Velebit association Kuterevo and about the Erasmus program. We hoped to spark some interest in what we do as well as spread awareness. 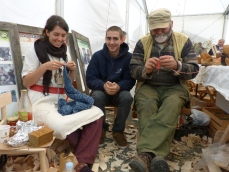