The third part of the project “Mountains connecting people” had a really promising beginning. 25 young people from Croatia, Kosovo, Bulgaria, Russia and Serbia gathered at a really special place – Bear Refuge Kuterevo, on the outskirts of Velebit mountain.

Some of the people already knew each other from previous two exchanges in Kosovo and Bulgaria and were really happy to be reunited with their friends. 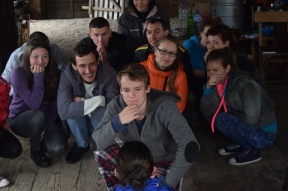 We marked the beginning of our project with games and activities that brought us even closer together as a team. The group agreed on some guidelines that would make our life as a community for the next 10 days easier. They also contributed to the idea of the project to live simple, sustainable and nature-friendly way of life. We also shared memories and experience from the previous projects. We were introduced to the bears and the bear refuge and got in touch with the spirit of Kuterevo. It’s a very special place in Croatia where people still live in harmony with nature and wilderness. 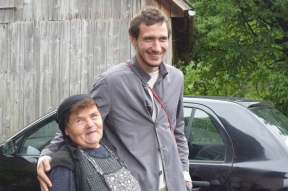 The local people introduced us to their way of living. They showed us how to make tamburica named kuterevka which is a typical local hand-made instrument and coklje which is a type of shoes which are only made in the village. After few discussions and workshops about volunteerism and activism, we wrote a letter to the future generation which provoked us to think few generations ahead. On Saturday we explored the surrounding area and wildlife by going on a short hike to Kopija – a special place where people from the village gather on holidays. It brought people together in the past and still does. We had a really challenging experience to prepare our lunch in silence. Without speaking we were able to understand each other even better. 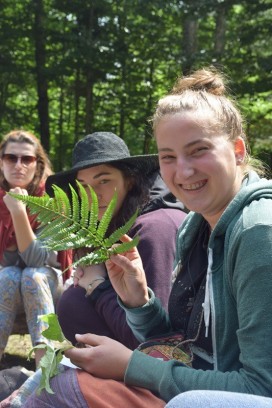 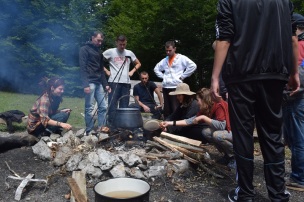 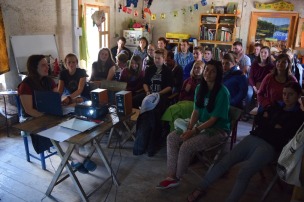 On Sunday we had skype meeting with Maruska an activist from Young friends of the Earth Europe who shared her experience and motivated us on future actions on Balkans. Later that day we spend some time with local families where we cooked to gather, shared a common meal and stories.

The highlight of the first part of the exchange was the 15-kilometer – hike to Northern Velebit National Park where we connected with ourselves, others and nature. We were also lucky enough to encounter some bear footprints. For some people it was the first serious hike in their lives and some of us even overcame their fears. We enjoyed some spectacular view of Adriatic sea from one the top of the hill. On the next day and we visited the Velebit botanical garden and then we took the trails of the beast and we went down to Krasno where we learned about growing your own garden and how medicinal plants are useful.

Dinner was shared with friends from Bärenfreunde and Postaja volunteers (volunteers station). Although we felt physically tired, we were inspired and glad to finally start with the more practical work. Now we are facing the task of finalizing the “Mountains connecting people” project.