After a week of informative and inspiring lectures, workshops and discussions, our group was ready to put what we had learned into practice.

But before that, we had a „break“ day, when we went altogether for an very interesting and inspiring excursion. We went first to visit an orthodox monastery, Visoki Dečani. Meeting the monks, visiting the church and listening to the story of all they went through during centuries was impressing and a very strong experience.

After that, we went to Prizren, a very beautiful city were we could discover another face of Kosovo. After simply walking along the river and enjoying the place, we visited the mosque and had a great talk with the Imam, who welcomed us warmly, introduced us to the place and its history, and who had beautiful and inspiring speach about peace and tolerance between religions.

The day ended at the fortress, watching the amazing view on the city, the mountains, and the sunset. Definitely a strong moment of this Youth Exchange, when we all felt connected and shared precious time. 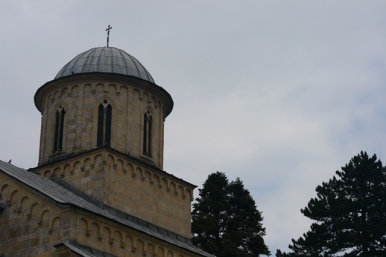 Once back to Brezovica, it was time to put our words and talks from the last few days into action! Our idea was to spread awareness and knowledge about climate change and climate justice. We wanted to create something meaningful, something that would make an impression on people and make them reconsider their behavior and habits.

We came up with two action plans. The first one came as an idea after part of our group went to the ski center in Brezovica. They told us how ridiculously polluted the ski slopes were and how people were absolutely uninterested in the state of their own surroundings. We wanted to bring the absurdity of the situation to the attention of the people. Our plan was to gather the garbage, make statues of it and simply talk to people. We also designed banners and flags, useful tools for putting the emphasis on what we want.

Upon arriving, we found out that the trash had been gathered and dumped at the entrance. This was a temporary setback, but it also meant we could focus on talking to people about climate change. We set up our banners, our dedicated team of snowboarders and skiers went down the slope a few times, carrying banners and wearing white painting overalls, to attract attention. Meanwhile the rest of us were doing our best to attract people’s attention and make them curious. After the initial shock of people wearing overalls and waving flags around had subsided, we were approached by all kinds of individuals. Naturally, some of them waved us off the moment we mentioned the word climate, but others took genuine interest in our campaign. One particular fellow was even convinced we were from National Geographic, because we “knew so much”. 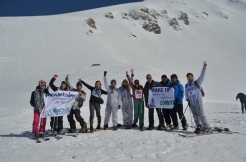 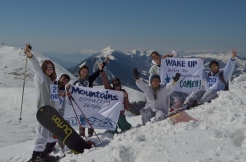 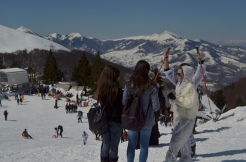 In the end, we did what we went there for – we talked to people, we shared our views and explained our mission. After hitchhiking home, we started preparing the action in Prizren. After rehearsing our march and synchronising our little routine, we were ready to take the stage in the city- the public square. The plan was to separate in two teams, march to the center drinking fountain and start reading stories of climate change victims. Every person of our group had a different story. It worked like a charm. Even during the marching bit, we had already gathered an audience. Once we started reading, people approached us and we explained what we’re doing and what our mission is. It was quite the experience. After a while, we ceased action and went to dinner, exhilarated and surprised how much interest people had shown. 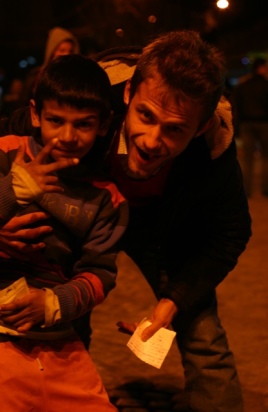 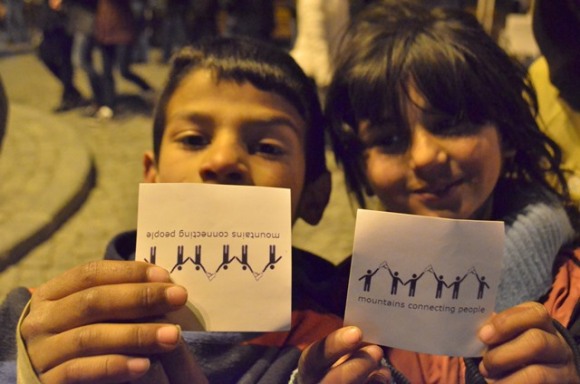 Besides the flashmob we also organized an exhibition in Prizren in a pub near by the square. For the installation we used the same stories and pictures that show the reality of the so called “climate change witnesses”. We decided to use the open space of the bar, where Gipsy Groove were performing. They supported our campaign and putted our banner “Wake up before the nightmare comes!” on the stage behind them.

It was quite interesting and intense day for all of us. Unfortunately “Winter Peace in Brezovica”, first part of the project “Mountains connecting people” is over, but we did a great job and we are all looking forward to the next part of it in the beginning of the summer in the eco village of Vlahi in Bulgaria.