Not always it´s possible to see all the wildlife surrounding us, but it is possible to recognize these animals, whether mammals, birds or reptiles, through the signals they left. The footprints, scats, dens, feeding marks, leftovers from the prey … give us evidence of their lives and for some animals this are the only way for be sure of their presence. Going out in search of traces allows us to be more conscious (in a non invasive way) about the animals that are living near us.

Monitoring is a method with whom you could determine the status of a species, if it’s present or not, what is its distributions, its trends (positive or negative) the absolute number, and the population health. Should be made with standard method, and the best thing is making it in all the population area. This can be difficult in case the population is spread in more countries (like Croatian bear population, that is part of the Dinaric-Pindos population, that includes 8 different countries!) 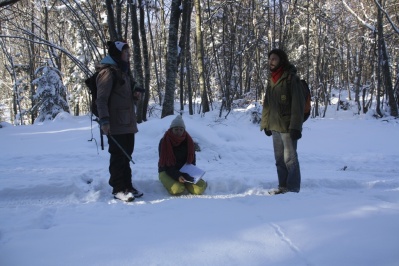 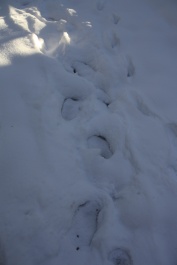 A perfect moment for monitoring wolf tracks is 24-48 hours after the fall of the first snow because once you find tracks, you follow them till they do not split in more and then you know the minimum individuals in that pack. So this Sunday, volunteers went for the second time (the first was in the end of November) to the forest. The aim was mainly monitoring the presence of large carnivores such as bears, wolves and lynxes in the area. For not make it only fun but also serious we use  GPS , fill in a standard form for Croatia, and monitoring data are sent to the coordinator for the region.

Even if you don’t find nothing, the lack of information is also an information, because the effort you made for finding a track can tell you for example if the specie is rare or not present in that area.

This is the first year that we volunteers are involved in the monitoring of large carnivores in Croatia and for that we received a training course. Thus, we are still practicing and looking for ways how volunteers can get more involved into monitoring of large carnivores and contribute to their conservation. The better are made these monitoring the closer to reality will be the estimating of the total number of individuals of a species and their population trend, from which will depend all conservation measures, including interventions in populations (such as hunting). 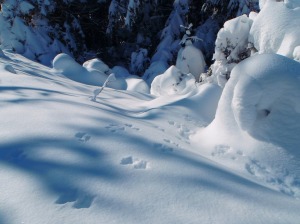 In these two excursions we found many traces of ungulates, rabbits, little rodents, foxes, mustelids and (one) bear tracks!

Some of us do not have much snow in the home country and seeing a white forest was really beautiful! 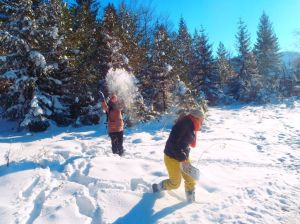