Who are the bees?

They probably appeared 100 000 years ago with the first flowers. Actually we know that there are more than 20 000 species in the world and 2500 in Europe.

Most of the time we focus our attention in the domestic bees because we only know this way to deal with them: to make them PRODUCE HONEY. Indeed, did you know that the majority of the bees do not produce it? They are wild, and one part live alone, or at least are independent.

All bees are vegetarians and browsers insect. That means they fly from flower to flower in search of food like nectar, Propolis, pollen and honeydew. By the same occasion bees ensures the pollination, which means the transfer of pollen to plant reproduction. Their role is essential: 84% of the cultivated plants in Europe depend of the pollination by the bees. Can we imagine a world without those precious insects for the planet…?

In many places in the World a lot of bees are disappearing. For example in United States from 1942 there have been a loss of around 45 % in the bee hives. What can produce these disappearing?

Several causes strike the bees and their Immune system, and added all together it creates their vanishing. Out the beehive, the extension of monoculture is limiting the diet of bees and the pesticides are finally recognized as a cause of the damage in their nervous system, which can be deadly.

Then, during the pollination, the bees are eating those poisons and 2 scenarios are possible: the pesticides damage the nervous system and bees die because are unable to orientate anymore. Or they carry it until the beehive where all the colony can be affected. What is the best up to you? 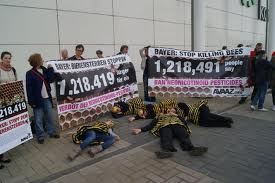 If you want to act in anyway, here you can sign this petition to ban pesticides.

About the beehive itself, the rectangular one used for the production of honey doesn´t allow efficient airflow in the corners, which can cause mold installation, as well as parasites and virus: then, the thermal regulation by bees is more difficult and condition of life worse. On the other hand some beekeepers use sugar to feed their bees, to make them produce more honey, limiting once again their diet.

What will happen if the bees continue disappearing? The bees are the most important pollinators and many plants depend on them. Their vanishing endanger the survival of plants biodiversity and many cultures around the world.

We watched the documentary “Vanishing of the bees” and discovered with terror that there are already several clues: in USA where they import bees by plane from Australia to pollinate monoculture or in China or some people are paying to pollinate by hands because there are not enough bees anymore… we are really loosing the bees right now on the Earth, and before to cry on our empty lands, we should wake up and realize how critical is the situation.

How we can act?

About bee hive itself, we can build them in round shape, like in nature, instead of in squared shape. Also, we shouldn’t feed them with sugar but with healthy and various kinds of food. That means modifying their and our environment: avoid monocultures and promote alternative cultures which include many melliferous Flowers, Agroforestry, permaculture, ecological agriculture, traditional cultures… the solutions are multiple, and can start in our own garden!

Albert Einstein once said : “If the bee disappeared off the surface of the globe then man would only have four years of life left. No more bees, no more pollination, no more plants, no more animals, no more man”.