It is estimated that around 2600 bears live in the Balkan peninsula. This Dinaric-Pindos population which rules in the mountain area from Slovenia till Greece, represents one of the last genetically stable populations of brown bear in Europe. This is also the last population which could be used for reintroduction of this species in Western Europe, if homo sapiens population somehow manages to recognize the need for that. The coexistence of bears and people is not something that can be done as a project financed by EU grants or as implementation of a policy which was created and adopted in parliaments, in the capital. Bears and people used to live together all throughout northern hemisphere for thousands of years. Only in the last 5-6 centuries, bears (as well as other large carnivores) were put on the „enemy side“ in most of cultures – cultures which started to „develop“, to industrialize, to  distance themselves from wilderness, mostly have exterminated bears from „their“ territories. 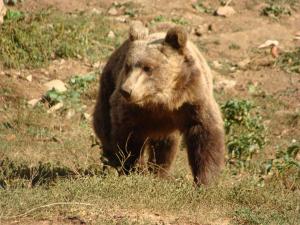 Nowadays, besides in the south of Europe, bears are accepted and still present in Carpathian region (around 8000) and Scandinavia (around 4500).

However, around 1000 bears live only in Croatia, mostly in Gorski Kotar, Lika and Velebit region. In the north-west from this area, in Slovenia, between 400 and 600 bears live while it is not known how many lives on the other side, in Bosnia and Herzegovina. The same bear species, the same population in 3 countries, under 3 different politics:

Bears used to live in whole Europe, but people took over the dominancy, for the cause of civilization (lat. civilis => civil (citizen) or civitas (city)), which has „organized“ and exploited the wilderness and as such enormously reduced habitat for all species which depended and evolved together with nature.  Besides habitat destruction, bears, as well as many other wild animals, were exposed to hunting and poaching. Bear was seen as enemy – rival in hunting – and thus bears were hunted without any control till when it became obvious that it is in danger. After foundation of forest management units, trophy hunting started to be popular, thanks to the interest from foreign hunters-tourist. Today in Croatia, trophy hunting is officially seen as one the main measures for maintenance of the people’s positive attitude towards bears (it brings money; local hunting unit leaseholders have an interest to keep bear population stable; reported damages are minor; the oldest and the smartest bears, usually male, end up flayed on some ego’s wall or floor).

Official reports claim that, with the current management, which includes annual cull of 10 to 15% (100-150 individuals),  population is not just stable, but that its growth is 7% per year. This also means that in 10 years we could have doubled number of bears in Croatia. Reports also claim that current hunting didn’t affect the size of the population (related to the previous sentence), but that it may influenced sex ration (no mentioning of age structure). Therefore, in 2012, hunters are obliged to kill more bears which are under 100kg weight, what should result in bigger participation of females in the annual cull. This obligation is not happily accepted by hunters, because killing females, which are mostly accompanied with cubs, does not fit with the hunting ethics (!). Another reason is related to economical ethics, since foreign hunters would not pay for hunting of an animal which cannot be used as trophy (lat. trophaeum – monument to victory). …Victory of what? 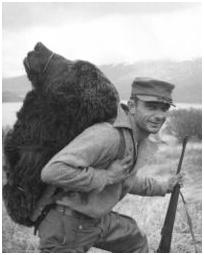 Next year, Croatia will become full member of EU community, where brown bear is strictly protected fauna species under The Convention on the Conservation of European Wildlife and Natural Habitats (the Berne Convention), which Croatia ratified in year 2000. Slovenia, Romania, Bulgaria and other bear-countries has been obliged to follow that legal act as well. This status change will probably change the practice and people’s attitudes. Some groups are in favor of these changes, while some are still confident that hunting, in particular trophy hunting will save the bears. Till than, in parallel with official politics, managements plans, bickering and lobbying,  many things can be done for the reputation and real status of the bears in the forest.

For more relevant information you can check the following documents

PROJECT IN WHICH CROATIA IS INVOLVED WITH BEAR HUNTING TOPICS

NGO report – THREAT TO THE BROWN BEAR IN CROATIA

Report by the Government – THREAT TO THE BROWN BEAR IN CROATIA